The concession lies between Kenton-on-Sea, Port Alfred and Grahamstown in the Eastern Cape Province of South Africa. The concession is approximately 130 km from Port Elizabeth Airport. Please refer to the map provided.

At this concession we will be staying on a guest farm. This farm is situated along one of the most unspoilt beaches in the country. The cottage has a sea view, easy trails and bird and game viewing.

The distances that we will be shooting can range between 70 and 200 meters. Calibers in the .270 Winchester - .300 Winchester Magnum range are preferable. Telescopic sights with a 4x - 6x magnification are more than adequate. Caracal and Blue Duiker will be hunted with a shotgun. Most hunting is done by walking and stalking.

Temperatures are not too extreme. During the months of April, October and November light clothing can be worn during the day and a light jacket at night. From May to September, the nights and early mornings are colder, which requires warmer clothing. Do not forget your pair of well-worn boots, a hat and sunscreen.

This area is Malaria-free. Insect repellent is advisable during the warmer months. The closest hospital is approximately 45 minutes away. 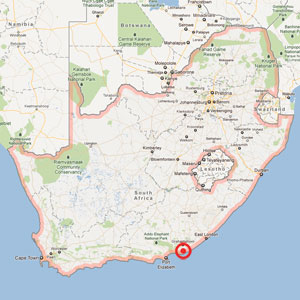